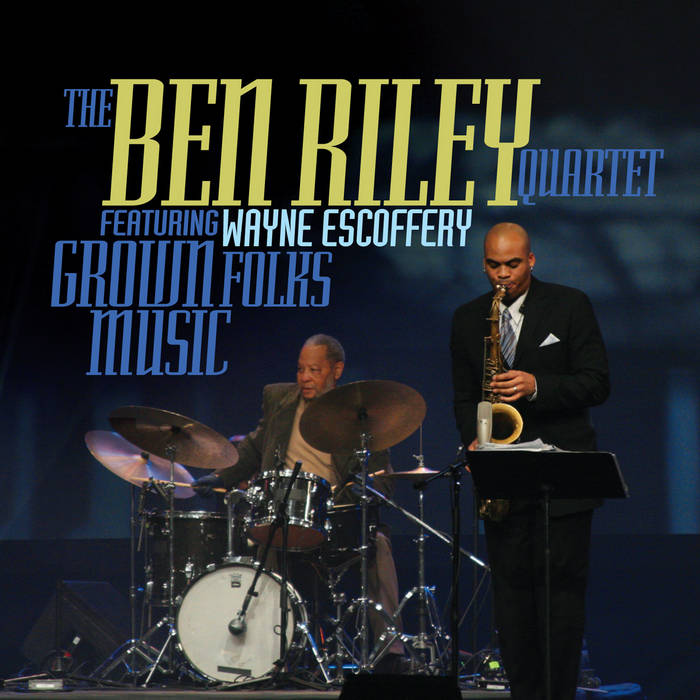 Though jazz may possess an abundance of youthful energy, time has proven that the masters of the art form have a level of maturity. Only a musician with a lifetime of practice and performance in that art form can master all of the profound and complex nuances of the music.

“After four years of working in Ben’s Monk Legacy Septet, I decided to ask a few clubs to present Ben in a more intimate quartet setting joined by one of his regular co-conspirators of groove, Ray Drummond,” Escoffery writes in the CD liner notes. “Smoke Jazz & Supper Club was the first to jump at the chance to book the group. On the car ride home after the quartet's first performance, guitarist Avi Rothbard and I relished the depth of what we had just experienced and concluded that that night, we had played solely ‘Grown Folks Music’ – An unsurpassed maturity and sophistication with a laid back groove that was relentlessly elegant and never ostentatious.”

The quartet’s performances of these seven songs illustrate Escoffery’s claim. Monk’s “Friday The 13th,” “Teo” and “Lulu’s Back in Town” all swing in vivid variations of 4/4, contrasted by the spellbinding brush stroked ballad “A Weaver of Dreams,” the stately version of “Laura” and the Latin-tinged “If I Ever Would Leave You.” On all the tracks, Escoffery’s solid sax, Drummond’s supple bass lines and the lush guitar chords provided by Rothbard and Bryant, all do musical justice to Riley’s spare, but-no-less swinging drumming: always on time and in the pocket.

Initially inspired by drummers Roy Haynes and Art Blakey, Riley grew up in the Sugar Hill section of Harlem and possessed a drumming style that was appreciated by a wide range of musicians, including Randy Weston, Sonny Stitt, Stan Getz and Billy Taylor. He received the fateful call to join Monk in 1964. As author Robin D.G. Kelley wrote in his award-winning biography Thelonious Monk: the Life and Times of an American Original, “[Riley] kept good sense of time, had a strong sense of swing, and had a penchant for the ride symbol and snare.”

Riley stayed with Monk for three years. “When the music was happening,” Riley told author Leslie Gourse in her book, Straight, No Chaser: The Life and Genius of Thelonious Monk, “Monk would get up and dance. When the music was swinging, he said he didn’t have to play.” After leaving the group Riley temporarily retired from the music business and worked for the Long Island school system. He returned to jazz and worked with Alice Coltrane, the New York Quartet, Ron Carter and Jim Hall. After the death of Thelonious Monk in 1982, Riley became a founding member of Sphere: a Monk repertory group consisting of Monk bandmates: tenor saxophonist Charlie Rouse, bassist Buster Williams and pianist Kenny Barron. Currently, Riley leads the Monk Septet, featuring Jimmy Owens. His records as a leader include Weaver of Dreams (Joken, 1996) and Memories of T (Concord, 2006).

With young Escoffrey spiritually channeling Charlie Rouse, Ben Riley's group delivers a sumptuous and swinging set of no nonsense jazz. “I think that this CD captures Ben at his best and I hope you enjoy listening to him here as much as I've enjoyed playing with him on the bandstand,” Escoffrey writes. “Drummer Ben Riley is truly one of a kind.”

Bandcamp Daily  your guide to the world of Bandcamp